Use the image below to answer all parts of the question that follows. 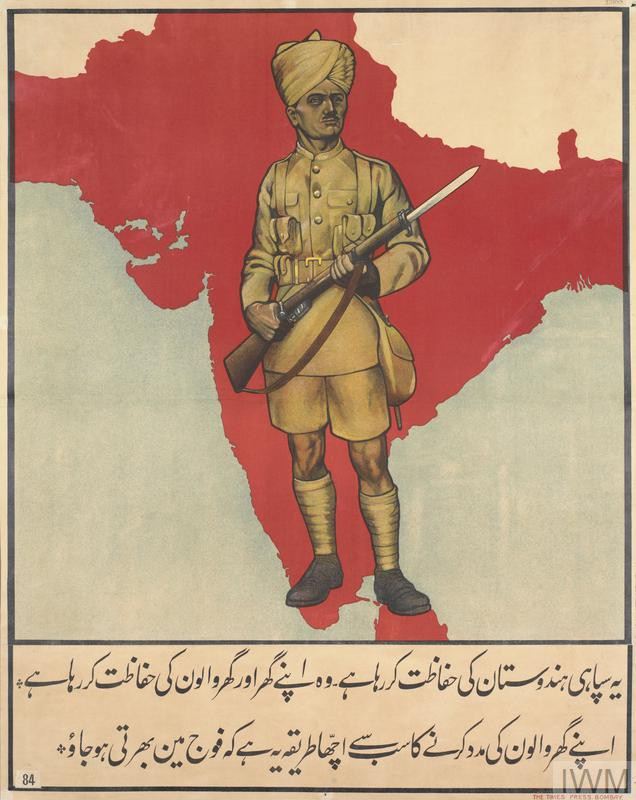 Urdu text: “This soldier is defending India. He is protecting his home and family. The best way to help your family is to join the army”

How to Submit
Reply to this thread with your 3-part answer.

Hey there! AP World Teacher here! Here is some feedback on your responses:

Overall keep in mind that each answer should have one specific piece of evidence. Keep practicing!

1.) One historical process which is reflected in this image is the use of colonial troops in the world wars. They would fight with the motherland with the Allied nations. This also shows propaganda, which India started to use to make people think that they are protecting their nation.
2.) One change in the relationship between India and Britain in the century after this poster was produced was the idea of India gaining independence from Britain. India was in a deal with Britain that if India used their troops to fight with Britain, they would be able to gain independence from Britain after the war. Thus, propaganda was used to help gather more troops.
3.) A similarity between how this poster attempted to mobilize people and the mobilization campaign of another empire’s is the use of propaganda to make citizens believe that it is for the good of their nation and for the good of their family back home. Germany uses propaganda as just like Inda as an attempt to mobilize people to build up their army. Germans had the same rational as India for mobilization.

Welcome to Fiveable and thanks for posting! I’m an AP World teacher and last Spring I was a Reader for the SAQ. Your answers here show solid understanding of the source, and have a some tips to fine tune them to earn maximum points.

Hello and welcome to Fiveable! I’m an AP World teacher and I was an SAQ Reader for last year’s Exam, too. Your answers show understanding of World History and the document. Here are some tips for each section.

Keep up the good work, and feel free to reply with questions or comments.

Welcome to Fiveable and thanks for replying! I’m an AP World teacher and I scored SAQs for last year’s exam. All of your answers show understanding of aspects of World History. Here are a few tips for sharpening them and increasing your odds of scoring points.

Keep up the good work!

Thank You for the feedback.

*ap® and advanced placement® are registered trademarks of the college board, which was not involved in the production of, and does not endorse, this product.